Kidney patient raises funds by cycling whilst on dialysis

Ian Exton aims to pedal the length of the Tour of Britain during his haemodialysis sessions.

Ian Exton, who has Chronic Kidney Disease (CKD), has been taking part in the PEDAL research study, funded by the National Institute for Health Research, since August 2018. 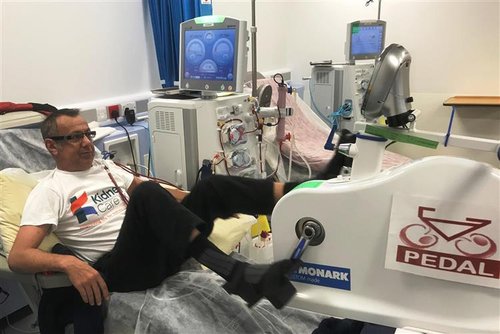 During his first session on the bike, Ian committed himself to pedalling the length of the Tour of Britain, a staggering 1,126km, to raise money for Kidney Care UK, the charity which has supported him.

Now, with just a handful of weeks left in the study, Ian has less than a quarter of the distance to go and is well on the way to meeting his target of raising £500 for the charity.

The PEDAL study is investigating whether undertaking exercise during haemodialysis is a cost-effective way to improve the quality of life of people with stage five chronic kidney disease.

Since his first session, Ian has been able to regularly increase the duration and resistance and says that the exercise has had a notable effect on his health.

He said: “It’s the first time I’ve taken part in a research study, but as soon as I found out that I’d be on a bike I realised I could help with research and raise money for a good cause at the same time.

“It’s been a really positive experience for me. Since I started taking part I’ve seen my fitness improve, and being able to try and improve week-on-week definitely keeps me motivated.

“The support I’ve received from everyone has been fantastic - from my friends and family to all the staff, Kidney Care UK, and my employer Linecross.

“Knowing that so many people are willing me to make the finish line has been a real boost during the times when it’s been tough.”

Rob Hope, head of fundraising at Kidney Care UK, said: “We’re touched that Ian has used this opportunity to also raise money for Kidney Care UK and it’s wonderful to see that he has also seen an improvement in his health and motivation.”