Friends to run London Marathon in memory of father

Jonny Hecht and Nick Leckerman from Glasgow are planning to run the Virgin Money London Marathon in April this year in honour of Jonny’s father George who passed away almost three years ago. 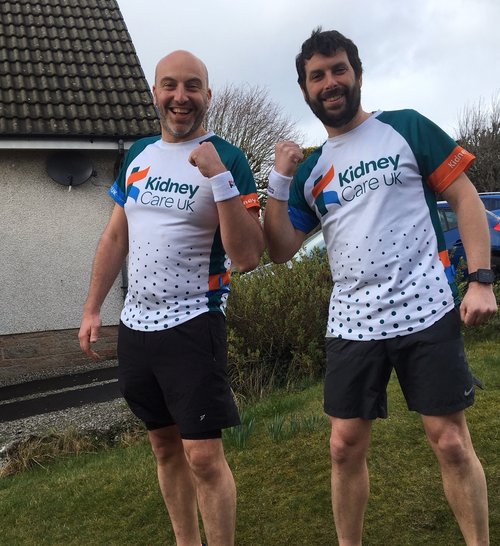 George had lived with kidney failure for a number of years and sadly passed away the week he was due to start dialysis.

Jonny said: “Dad was a real inspiration to both of us, he was heavily involved in charities for most of his life and we are keen to carry on in his footsteps and would love to support others who are faced with similar situations to what we went through as a family.  Growing up, he always encouraged me to work hard, help others who may be less fortunate and generally be a good all round person and Nick and I feel that taking on a challenge like the London Marathon really honours those values that were so important to him. We are proud to do our bit for a fantastic charity like Kidney Care UK.”

Robert Hope, Head of Fundraising at Kidney Care UK, adds: “As a charity we receive no government funding so we rely on the kind generosity of supporters like Jonny and Nick. It’s an honour to know that Jonny and Nick want to take on such a challenge in memory of George, and we’ll be there supporting them every single step of the way.”

Jonny and Nick hope to raise £4,000 for Kidney Care UK. You can sponsor them on their JustGiving page.

Kidney Care UK has a team of 22 who are on track to raise an amazing £35,000 all in support of kidney patients and their families.

If you'd like to support our runners or wish them good luck on social media, then please include the hashtag #KidneyWarrior

Calls for furlough scheme to be extended for…

A way forward from shielding

Worried Sick – at the ragged edge

It is likely that people will be advised that they no longer need to shield from August onwards.