Cost of living: the impact on kidney patients

Increases in the costs of utilities, fuel and food will push thousands of kidney patients into real financial hardship. Having to choose between dialysing, heating your home and putting food on the table is not acceptable. Help us fight for better Government and NHS support for the UK’s most vulnerable kidney patients.

For three million people living with chronic kidney disease the cost of living increases in 2022 will be especially difficult – and many were already struggling.

Having listened to our beneficiaries, we’ve decided that enough is enough. No one should have to choose between heating, eating and life-saving medical treatment. We have made a conscious decision to do more to support more patients at a time when our community needs more help than ever.

But as a charity we can only do so much – now we need others to step up too.

The rising cost of home haemodialysis 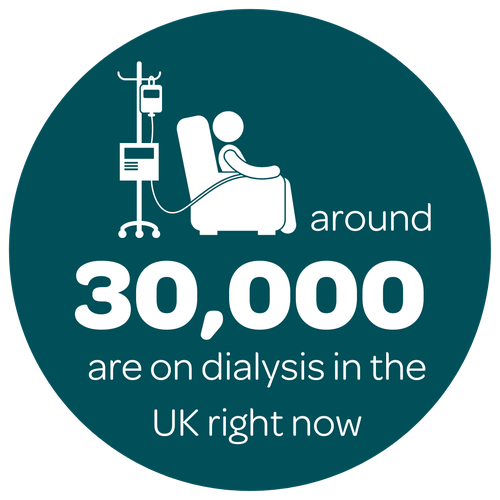 There are about 30,000 people with kidney failure on dialysis in the UK; many are often extremely cold due to anaemia. Around 5,000 of these people receive dialysis treatment at home.

Home haemodialysis already costs people between £590 and £1,450 per year (before any price increases) due to increased water and electricity usage. Data from the UK Kidney Association shows that almost half of people receiving home haemodialysis (44%) are in the two most deprived groups in society.

The employment rate for people on dialysis is just 26% which means that many people on dialysis are already on low incomes. The associated side effects of dialysis (which include cognitive impairment, extreme fatigue, and feeling very cold) make even the simplest of everyday tasks hugely difficult.

In some parts of the country, home dialysis patients are partially reimbursed for additional utility costs by their hospitals, but this doesn’t meet the full costs incurred and reimbursement is only given after the money is spent. To further compound the problem, reimbursement isn’t uniform across the UK.

We have to put effort in just to stay alive. I genuinely believe that the rising cost of living will tip some people over the edge and will cost lives.

We are expecting a significant increase in requests for hardship support this year; many patients have already raised concerns about how they will be able to cope.

Priced Out of Existence campaign raised in Parliament

We were delighted that the leader of the Labour Party, Sir Keir Starmer, chose to mention our Priced Out of Existence in Prime Minister’s Questions and share the story of Phoenix Halliwell, the home dialysis patient who named our campaign and has spoken to the media and politicians on behalf of the kidney community.

You can watch PMQs and listen to the Prime Minister’s response to Sir Keir’s comments on the cost of living crisis. Kidney Care UK will continue to fight for full reimbursement of all home dialysis costs for all patients in the UK.

The improvement of dialysis care outcomes was also discussed in Parliament on Thursday 19 May and can be watched on Parliament.tv.

Making the most of your money

We know that life can be hard when you’re coping with a long term condition like kidney disease and it can ...

Our 2021 impact report outlines the positive changes we made to the lives of people affected by kidney dise...